This year the Rio Rancho Public Libraries participated in the American Express Small Business Saturday Initiative as part of our developing efforts to reach out to small businesses in Rio Rancho.  We partnered with the City’s Economic Development department, as well as with the Santa Ana Star Center (our local events venue).

We ran a three part program.  First, the two library branches along with the collaborating City departments registered as ambass 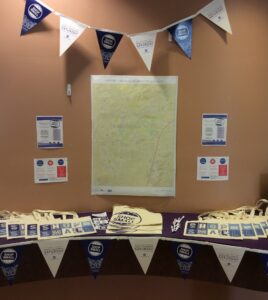 ador sites which made us recipients of the AmEx Event Kits, which included bags, posters, balloons and a myriad of other branded items. These were distributed to the businesses and also at the library branches.

We had 17 participating businesses, which exceeded our expectation of 10-12.  The businesses agreed to give a 10% discount to customers who showed their library card. This was the easiest part of the campaign to explain to both the businesses and the customers.

For the final part, there were raffle tickets available at each of the participating businesses. Entering qualified residents to win one of four $50 Visa cards, courtesy of the Friends of the Library, or a pair of tickets to the upcoming Cirque du Soleil show, courtesy of the Santa Ana Star Center.  The businesses were also encouraged to participate as the one with the highest level of participation winning tickets to another upcoming show.

The event was promoted by the City and Libraries alike. The Mayor recorded a video and we promoted it across available social media channels, as well as internally in the branches.  The Economic Development team also ran an ad on AdWallet, which was shared by nearly 40% of those who viewed it.  Details can be found on the City website: https://rrnm.gov/shopsmall.

While the official event is one day we extended it to a week as it would give both the businesses and customers longer to participate.  In future years, we hope to build on our success of this first year, reinforcing the idea that your library card has a number of benefits, one of which is getting a discount while supporting the local economy.