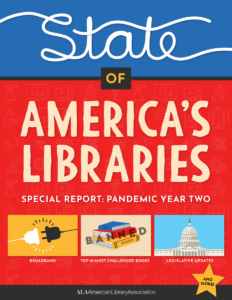 CHICAGO – The American Library Association (ALA) kicks off National Library Week with the release of its State of America’s Libraries Report, highlighting the challenges U.S. libraries faced in the second year of the pandemic – as well as the ways they innovated to meet the needs of their communities.

Library staff in every state faced an unprecedented number of attempts to ban books. ALA’s Office for Intellectual Freedom tracked 729 challenges to library, school and university materials and services in 2021, resulting in more than 1,597 individual book challenges or removals. Most targeted books were by or about Black or LGBTQIA+ persons.

“The 729 challenges tracked by ALA represent the highest number of attempted book bans since we began compiling these lists 20 years ago,” said ALA President Patricia “Patty” Wong. “We support individual parents’ choices concerning their child’s reading and believe that parents should not have those choices dictated by others. Young people need to have access to a variety of books from which they can learn about different perspectives. So, despite this organized effort to ban books, libraries remain ready to do what we always have: make knowledge and ideas available so people are free to choose what to read.”

Below are the Top 10 Most Challenged Books of 2021

Recent polling shows that seven in 10 voters oppose efforts to remove books from public libraries, including majorities of voters across party lines. Three-quarters of parents of public-school children (74%) express a high degree of confidence in school librarians to make good decisions about which books to make available to children, and when asked about specific types of books that have been a focus of local debates, large majorities say for each that they should be available in school libraries on an age-appropriate basis.

In response to the uptick in book challenges and other efforts to suppress access to information, ALA will launch Unite Against Book Bans, a national initiative focused on empowering readers everywhere to stand together in the fight against censorship. More information is available at uniteagainstbookbans.org.

About the American Library Association
The American Library Association (ALA) is the foremost national organization providing resources to inspire library and information professionals to transform their communities through essential programs and services. For more than 140 years, the ALA has been the trusted voice for academic, public, school, government, and special libraries, advocating for the profession and the library’s role in enhancing learning and ensuring access to information for all.