The Office of Archaeological Studies (OAS) brings one-day events to your library, each featuring a hands-on exploration of New Mexico archaeology and prehistoric lifeways using a wide range of archaeological artifacts to tell the story. The artifacts are essentially arranged as a time line that begins with the earliest Paleoinidan Clovis and Folsom Points and proceeds through various time periods down to around WW II.

Library patrons of all ages to have direct hands-on experience with a wide range of artifacts as well as talking with an archaeologist. The artifacts inspire the imagination of the patrons and lead to deeper levels of interaction about such things as preservation, cultural diversity, environment, and a wide range of topics.

These programs represent the ever growing New Mexico archaeological record, which is currently represented by nearly 180,000 officially recorded sites.  These sites include 12,000 year old Clovis spear points left behind by the earliest Pleistocene big game hunters, 3000 year old Archaic rockshelters bearing witness to the initial tentative experiments with agriculture, sherds of the first pottery made 2000 years ago by the ancestors of Pueblo Indians, the religious monuments of Chaco Canyon, metal strike-a-lights from early Spanish colonists, and the litter of bottles and cans that accumulated along the Santa Fe Trail since its opening in the 1820s.

Come learn about a wide range of artifacts from these time periods at this hands-on exhibit.  Experience how Native Americans made and used yucca cordage, stayed warm with turkey-feather blankets, and how the atl-atl was used by ancient hunters.  This is also an opportunity for patrons to bring curious artifacts from the past and have an archaeologist help you with their identification and use! 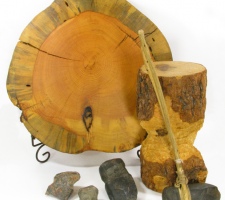 Selection: We will work with our partners, OAS, to determine a plan that will bring as many programs to libraries as possible. There are many factors considered when making the plan, and what will help set the final plan are the following factors: