Librarians Introduced on Library Legislative Day to House and Senate

This past Thursday, librarians from across New Mexico gathered together at the Roundhouse to 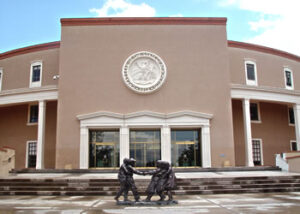 advocate for libraries on Library Legislative Day. On the Senate and House floors, delegations of librarians were introduced.

Introduced to the Senate by Senator Soules:

Introduced to the House by Representative Armstrong:

Also, House Memorial 48 was introduced, requesting the New Mexico State Library to “support a needs assessment for New Mexico libraries and to conduct a statewide conference for libraries.” (The full text of this is below.) Joe Sabatini reports, “In addition to the sponsors, Rep. Armstrong and Sen. Soules, remarks were made about libraries and librarians by Senator Richard Martinez, Senator Michael Padilla and Representative Cathrynn Brown.”

The bill to have a library needs assessment and 2016 statewide library conference was introduced as House Memorial 48. Library supporters are asked to communicate with Representatives to support this memorial. A similar memorial will be introduced in the Senate.

INTRODUCED BY Deborah A. Armstrong

A MEMORIAL REQUESTING THE NEW MEXICO STATE LIBRARY TO SUPPORT A NEEDS ASSESSMENT OF NEW MEXICO LIBRARIES AND TO SUPPORT AND ASSIST WITH A STATEWIDE CONFERENCE TO IDENTIFY POLICIES AND GOALS FOR IMPROVED LIBRARY SERVICES.

WHEREAS, with the dawn of the digital age, libraries in
New Mexico and across the United States are no longer only
repositories of books; and

WHEREAS, like the rest of American society, the library’s
role in the community has been transformed by the digital age;
and

WHEREAS, libraries have become service centers for many
New Mexicans who need free access to computer and internet
services, including residents in rural and underserved
populations in New Mexico; and

WHEREAS, according to a study completed by the university
of New Mexico’s bureau of business and economic research, New
Mexico’s public libraries provided public access to one
thousand four hundred thirty-three computers in fiscal year
2011, with each library branch averaging twelve public-access
computers; and

WHEREAS, online access has become increasingly important
for multiple purposes; and

WHEREAS, more businesses require applicants to apply for a
job online, while employment with the state of New Mexico is
only conducted through online applications, and most job
notices today are posted online exclusively; and

WHEREAS, the American library association reports that for
the third consecutive year, services for job seekers remain the
top-rated internet service that libraries provide; and

WHEREAS, libraries are being called upon to provide
technology training, assistance with job applications and
support for accessing electronic government and social
services; and

WHEREAS, students at all levels require access to internet
and computer-based resources for educational purposes, and more
people are using computers and the internet to keep in touch
with families and colleagues; and

WHEREAS, libraries provide educational programming and
services for Native American and Spanish language users; and

WHEREAS, funding for libraries was cut in New Mexico and
across the nation as a result of the economic recession, and
New Mexico libraries are challenged to meet these real and
increasing demands; and

WHEREAS, there are one hundred four public libraries,
including branch libraries, in New Mexico; and

WHEREAS, there are ninety-two school districts with eight
hundred twenty-one school libraries in New Mexico; and

WHEREAS, there are twenty-seven academic research,
comprehensive, branch and community college libraries and
nineteen tribal libraries in New Mexico; and

WHEREAS, there is a need for libraries and policymakers to
assess the expanded role of libraries and to identify the
necessary resources needed to properly fulfill this role; and

WHEREAS, there is a need for libraries and policymakers to
develop policies to provide future services to New Mexico
residents to achieve the goals of improved quality of life and
the enhanced economic well-being of its residents;

NOW, THEREFORE, BE IT RESOLVED BY THE HOUSE OF
REPRESENTATIVES OF THE STATE OF NEW MEXICO that the New Mexico state library, which serves as the support agency for all
libraries, be requested to support a needs assessment of New
Mexico libraries; and

BE IT FURTHER RESOLVED that the New Mexico state library
be requested to support and assist library organizations in New
Mexico to convene a statewide library conference to develop and
adopt policies to achieve goals for improved library services;
and

BE IT FURTHER RESOLVED that copies of this memorial be
transmitted to the state librarian of the library division of
the cultural affairs department and to the president of the New
Mexico library association.