Find Yourself in a Book: Students Create Book that Changes Lives

The following was written by Val Nye, Library Director at the Institute of American Indian Arts, and submitted by Roseanna Andrade, IAIA student and author of Letters from Luis: Las Cartas de Luis. 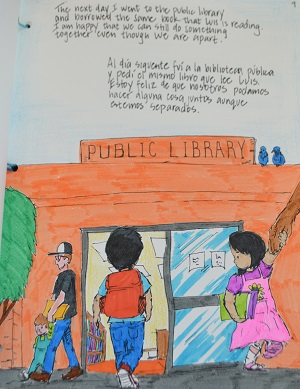 Several weeks ago IAIA student, Roseanna Andrade, came into my office with a folder in her hands. She set the folder gently on the table in my office and carefully opened it to reveal the colorful hand-drawn cover of a book with a yarn-tied binding: Letters from Luis: Las Cartas de Luis. As I was to learn through my conversation with Roseanna, it was a book she wrote and worked to illustrate with her friend and fellow student, Frosley Fowler. The children’s book (for people of all ages) holds a powerful message of change and hope. Their book is already changing the lives of young people in Santa Fe.

I had the honor of talking to Roseanna and Frosley about their experience with the book thus far. It is a story of inspiration, collaboration, creativity, and activism.

Roseanna was inspired to write the text of the book after interviewing two women for an assignment in her Oral History class last fall. She interviewed Mara Taub and Demetria Martínez, the women who founded the Biblioteca Amigos Library at the Santa Fe County Youth Development Center. During the interview Roseanna learned about the library’s founding in 2014 and a poetry workshop the women started as programming for the library. As part of her research, Roseanna read the poetry written by incarcerated youth living at the youth detention center. 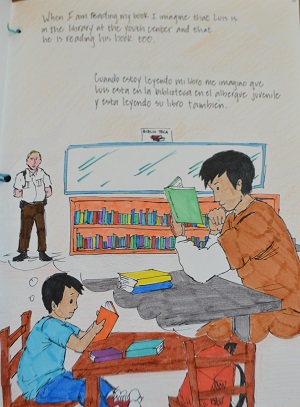 Roseanna was so inspired by the work of Taub, Martínez, and a poem written by a teenager named Luiz, that she felt compelled to write a story. Roseanna’s story is about nine-year-old Ernesto, a boy whose older brother, Luis, is incarcerated the detention center in Santa Fe. In the story Luis visits the library at the Youth Development Center, a place that inspires an idea for Luis that will allow the brothers to stay in contact. He writes to his brother, Erenesto, explaining that Ernesto can visit the public library and check out the same books he is reading in the detention center library. They can read the same books while they are apart. Luis also learns to write poetry and shares his poems with Ernesto in the letters they exchange. The poems in Roseanna’s books are actual poems written by incarcerated teens in Santa Fe.

When Roseanna was considering illustrations for her story, she turned to her friend and collaborator, Frosley. The pair have developed a shared artistic partnership and understanding that some people search for their entire lives. Interviewing them together, it was clear they share a creative energy. Roseanna said as they were working on the book she would describe the scene she had in her mind as she wrote the book, and Frosley would create illustrations that perfectly reflected her vision. Frosley, a Cinematic Arts and Technology major, explained that he used the skills he has learned for storyboarding films and creating perspective to illustrate the book from a child’s viewpoint. This is the first book Frosley has illustrated, but he says he has been creating coloring books for his younger brothers and sisters for most of his life. Frosley’s drawings were inspired by Native American illustrators Shonto Begay and Bahe Whithorne Sr.

Both Roseanna and Frosley are interested in using books and art as a catalyst for change in their communities. Roseanna is now an intern at the Biblioteca Amigos Library where she sees first-hand how books can change the lives of teenagers. As part of her job, Roseanna welcomes teens into the library and encourages them to have conversations with her about books. When a patron says that they don’t read books, she asks them if they would be interested in reading a book she has written. This question piques their curiosity, and they frequently sit down to read Letters from Luis. The readers literally see themselves in her book. Luis wears the detention center uniform and sits in a library illustrated to depict the library as it actually exists at the detention center. The book has become a conversation piece that has led patrons to search for other books in the library that reflect their lives. Roseanna also works to understand readers’ interest and is quickly becoming familiar with young adult books so that she can help teens find books that fit their interests. She also recently learned that her book has inspired at least one incarcerated teen to write her own life story; to write her own book.

Reflecting back at the creation of the book, her new internship at the library, and the lives she and Frosley have already touched with this book Roseanna shares, “This was just a class project, but it goes way beyond that.” The two have future plans to expand the book’s influence. They would like to explore publishing options and distribute the volume to children and families who have incarcerated family members. Their goal is to place their book in prison libraries, youth detention centers, and elementary schools around the country.  Through their experiences with this project, Roseanna and Frosley have recognized that children are deeply affected by incarcerated family members. Talking about family members who are imprisoned is not a common topic of conversation. People who are incarcerated often become invisible family members, especially to children. The authors’ hope is that their book will create avenues for children to talk about their family members and that there will be less of a stigma associated with families of the incarcerated.