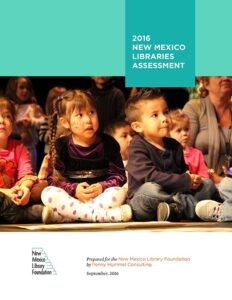 In 2015, the New Mexico legislature formally expressed support for the assessment. “We are extremely pleased to be providing these results to New Mexico residents and decision makers,” said Carol Hoover, Chair of the Board of Trustees of the New Mexico Library Foundation. “The assessment’s findings clearly show the essential role that libraries of all types play in the health of our state, and outline key areas where there are critical needs to be addressed.”

Key findings of the assessment include the following:

Conducted by national library consultant Penny Hummel, the assessment included a statewide library survey, as well as focus groups and public community conversations held in several locations across the state. 269 New Mexico libraries participated in the survey, which included 67% of New Mexico’s academic libraries and 84% of its tribal and public libraries, as well as librarians representing 19 school districts and 12 special libraries. With the exception of Catron, Harding and Mora counties, all New Mexico counties were represented by at least one library in the survey. Data from the assessment will be used to inform a statewide conference on November 1, Libraries Transform New Mexico, which will gather together 100 New Mexico stakeholders including legislators, policymakers, community leaders, librarians, library supporters/patrons and members of the general public. This event will be an exciting opportunity to showcase the accomplishments of New Mexico libraries and, more importantly, to identify ways libraries can further expand as collaborative partners with educational institutions, cultural organizations, government services and private enterprise.