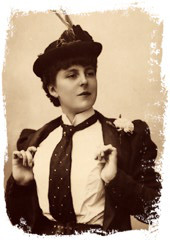 The bibliography consists of well written and illustrated books with significant feminist content, intended for young readers from birth to 18 years old. This year’s list includes titles published between July 1, 2013 and Dec. 31, 2014.

The bibliography is intended to aid children and teens in selecting high-quality books released over the past 18 months and may be used for a recommended reading list for youth and those who interact with them and as a collection development or reader’s advisory tool for interested librarians. The top 10 titles of the 2015 Amelia Bloomer List include:

The ALA Social Responsibilities Round Table (SRRT) is a unit within the American Library Association. It works to make ALA more democratic and to establish progressive priorities not only for the Association, but also for the entire profession. Concern for human and economic rights was an important element in the founding of SRRT and remains an urgent concern today. SRRT believes that libraries and librarians must recognize and help solve social problems and inequities in order to carry out their mandate to work for the common good and bolster democracy. SRRT’s main Web site is hosted at http://libr.org/SRRT.